Love Your Leftovers: Tricks and Tips to Help You Get More from Every Meal

If “leftovers” is a dirty word in your home, it’s time to scratch that mindset. We’re not talking about zapping last night’s dinner in the microwave — we’re talking about transforming it!

By using key elements from one meal in an entirely new way a day or two later, you can cook once, eat twice, and it never feels like a rehash.

THIS is the magic of rollover meals.

A rollover meal is one that repurposes leftover ingredients from another dish in both practical and creative ways. (Think using extra filling from last night’s carne asada tacos as a topping for tonight’s Southwest taco pizza.)

Rollover meals mean you’re starting on second base the minute you step into the kitchen. Add some fresh elements here. Amp up the taste with a flavor-packed Simply Organic simmer sauce or seasoning mix there. And suddenly you’ve scored a lunch or dinner home run with minimal effort.

Not to mention, using more of your leftovers means less food waste, fewer trips to the store, and more money in your pocket!

If you’re thinking, “Sounds great in theory, but…” we’ve got a few easy tips to help you put this technique into practice. Plus, we’ve laid out a whole week’s worth of rollover meals for you to try at the end of this article.

Soon you’ll be whipping up satisfying, nourishing, organic meals that you actually look forward to — usually in well under 30 minutes.

Get in the habit of cooking more than you’d normally serve in one sitting. It takes virtually no extra time or effort to add a few more chicken thighs to your sheet-pan dinner and save them for a rollover meal.

Roast chicken, pulled pork and even baked or poached salmon all have great rollover potential, as do roasted vegetables. Even stews, chilies and soups can easily be turned into meals that seem light-years away from their first incarnation.

Tip 2: Pump Up the Flavor

What leftovers often lack is vibrancy. Many spices and seasonings lose their oomph in the refrigerator, so make sure any ingredients you plan to rollover into another dish are well seasoned to begin with.

Simply Organic simmer sauces, spices and seasoning mixes bring bold, potent flavor to even quick-cooked meals, so you know your food will taste as good the second time around as it did on the first go. Let that flavor guide your rollover meal plan!

Use the pork shoulder you slow-cooked with Tikka Masala Simmer Sauce to fill tasty meat and veggie wraps, or pile the pork on naan and sprinkle with cheese for a new take on flatbread pizza. Another great option? Make zesty fajitas or a comforting tortilla soup with the leftovers from the sheet-pan chicken meal you seasoned with Southwest Simmer Sauce or Southwest Seasoning Mix.

Tip 3: Change Up the Texture

This is one of the easiest ways to give leftovers a new lease on life. If you have leftover chunky bean chili in the fridge, fold it into a luxe skillet mac and cheese. A spicy vegetable curry is unrecognizable but just as delicious as a smooth, pureed soup when you thin it with broth and whir it in the blender. You can also add crunch with ingredients like toasted nuts, raw vegetables or roasted chickpeas.

Finally, add something with bite and tang to your rollover creation.

A big squeeze of lime juice and an extra sprinkle of Southwest Taco Seasoning Mix will make the chicken in tonight’s fajitas taste as bold and fresh as it did on day one. A dash of hot sauce or pickled vegetables can go a long way as well.

Meal planning seems like something only the most organized people can pull off. But in truth, all you need is a little practice.

To help get you started, we asked our favorite chefs and home cooks to help us create a few rollover meal plans that any beginner can follow. The results did NOT disappoint!

These four dinners show just how easy it is to turn leftovers into brand new meals. And if you’ve precooked and stored a few fundamental building blocks like rice, steamed veggies or beans, dinner will be on the table even faster. (Speaking of which…check out our Batch Cooking article for ideas and tips for cooking grains and other kitchen basics in bulk.)

OK — now’s the time to put everything you learned to the test. Make one (or all) of these rollover meals. And start seeing leftovers in a whole new light!

Cut two large sweet potatoes, three bell peppers and one red onion into chunks and place in a roasting pan. Drizzle with olive oil, season with salt and pepper, and spread in an even layer.

Next, pat three to four pounds chicken parts dry with paper towels. If the breasts are very large, cut each in two pieces. Loosen the skin around the breasts and thighs and rub a few spoonfuls of Classic Fajita Simmer Sauce underneath the skin, spreading it against the meat. (Don’t throw that packet out — save the extra sauce for tomorrow!)

Slather a little more sauce over the outside of the bird, season all over with salt and pepper (or Southwest Taco Seasoning Mix to really double down on flavor), and place on top of the vegetables. Roast in a 425° oven until an instant-read thermometer inserted into the thickest part of the breast registers 165° and the juices run clear, about 40 to 50 minutes.

Serve the chicken with the roasted vegetables and save the remainder for your rollover meal.

Shred the leftover roast chicken, place it in a baking dish and toss with the remaining Classic Fajita Simmer Sauce. Place the leftover roasted vegetables in a second baking dish. Cover both loosely with aluminum foil and place in a 350° oven until heated through, about 20 minutes.

Meanwhile, wrap flour tortillas in aluminum foil and place in the oven to warm. Bring the baking dishes and tortillas to the table, along with sliced avocado, lime wedges and chopped fresh cilantro, and let everyone assemble their own fajitas.

Season a boneless pork shoulder or butt (5 – 6 lbs.) with salt and pepper. Place in a six-quart or larger slow cooker, pour ½ cup of water around it, then cover and cook on low until the meat is tender and can be easily shredded, about 10 to 12 hours. Transfer the pork to a clean cutting board or rimmed baking sheet.

Pour Tikka Masala Simmer Sauce into a saucepan with a splash of heavy cream or coconut milk. Bring to a simmer. When the pork is cool enough to handle, shred the meat and place it in a large bowl. Toss with the sauce and serve portions over rice, quinoa or cauliflower rice, garnished with chopped fresh cilantro.

Arrange naan (store-bought works fine!) on a baking sheet. Leaving about a ½” border, top each naan with some of the leftover pulled pork in its Tikka Masala sauce, along with a handful of torn baby spinach. Sprinkle generously with shredded mozzarella and bake in a 500° oven until the cheese is melted, about five to seven minutes. Garnish with chopped fresh cilantro. 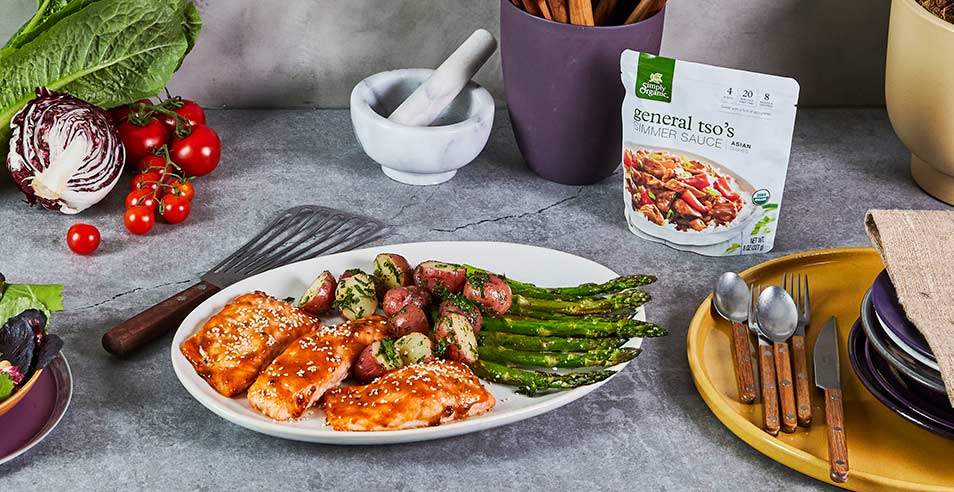 Roast in a 400° oven for 12 to 15 minutes, or until the glaze is slightly caramelized and the fish flakes easily. Serve warm with roasted asparagus and parsleyed new potatoes. 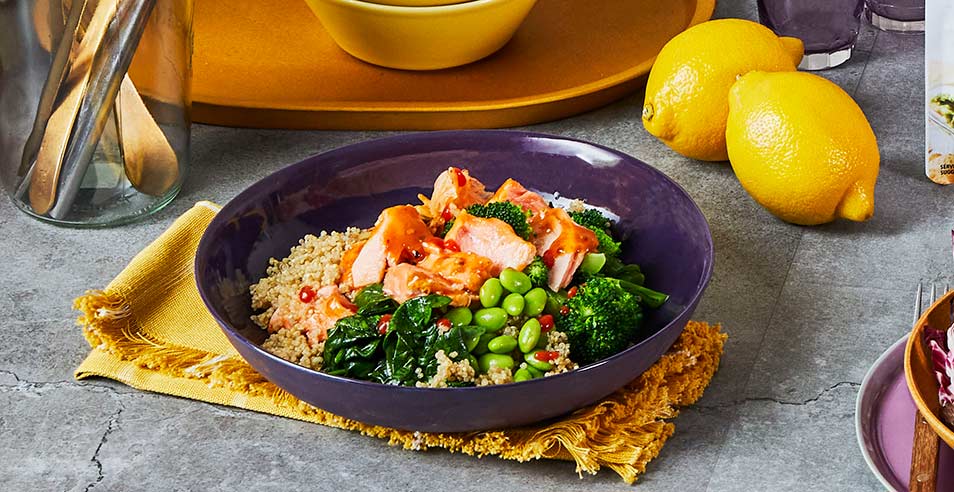 Warm cooked quinoa and mound it in individual serving bowls. Flake the leftover salmon into small chunks and make a small pile of fish atop the quinoa. Add a spoonful of edamame and bits of cooked, raw or preserved veggies like steamed spinach, broccoli florets, pickled daikon or kimchi. Drizzle with a bit more of the original simmer sauce (and a dash of hot sauce to taste) and add a fried egg for extra protein, if you like.

Heat a generous drizzle of olive oil in a Dutch oven or large pot and sauté the onion and peppers until softened, about five minutes. Add the garlic and sauté a minute more. Pour in three cups low-sodium vegetable broth, one (28-ounce) can organic fire-roasted tomatoes, two (15-ounce) cans organic black, pinto or kidney beans (or a combination), and a pouch of Southwest Taco Simmer Sauce.

Bring to a boil, reduce the heat and simmer uncovered for 10 minutes. Season to taste with salt and cayenne pepper, if desired. Serve with your choice of sour cream, shredded cheddar cheese, chopped scallions, diced avocado, hot sauce or a combination.

Fill a large, oven-safe skillet with water and bring to a boil. Season generously with salt, add a ½ pound of dried elbow macaroni, and cook a minute less than package instructions, stirring frequently.

Spread the mixture out in an even layer, sprinkle with an additional ½ cup of shredded cheddar, and bake in a 450° oven until heated through, about five minutes. Turn the oven to broil and broil until the cheese on top is browned in spots, about one to two minutes. Garnish with pickled red onions or jalapeños.