Learn how to fire up the best grilled flavor with our guide to the 10 best spices for grilling. Whether you’re new to grilling or you’ve mastered the skill, it’s easy to create your own signature grilling seasonings for everything from vegetables to fish and poultry. The smoky, sweet smells coming from your backyard are sure to bring in all the neighbors and friends! Here are our top 10 spices for grilling this summer.

Let’s start with the most critical and basic of all seasonings, salt. Salt is used to season food and intensify the flavors. However, there is a fine line between adding too much salt and making it taste salty, and adding enough to really pull out the seasoning making the food flavorful. The good news is that salt when adding during the cooking process acts as the best flavor enhancer over salting foods at the end, which can leave them tasting nothing but salty. Make sure when making your own grill seasoning blends that salt is a component of each one.

Think ground mustard, coriander, and celery seed. You may have seen them on the shelf but wondered how in the world to use them? Seeds are actually loaded with flavor, and grilling is one way to unleash that. When the seeds are ground their pungent flavor comes through, bringing a big flavor profile to foods. Of course, you can also use the whole seed — like fennel, dill or sesame seeds — letting the heat burst open the seeds to unleash the flavor.

Paprika is one of the most commonly used spices amongst all cuisine. It is a powder made from ground sweet red pepper pods that's available in sweet, spicy and smoked varieties. Paprika has a light flavor, rich color and smooth texture that adds a depth of flavor and intensity that makes most dishes shine. It’s a little smoky, yet sweet and hot in a restrained way all at once. It pairs well with garlicky marinades, vegetable mixes, and even seafood rubs.

Turmeric may not be the most commonly used grilled spice but it definitely has a place to stand in the top ten. Turmeric has a vivid orange color and sharp earthy, rich and light flavor that adds a punch without overpowering any food, especially chicken. It’s a member of the ginger family and is a common ingredient in spice blends from the Caribbean, India, Indonesia and the Middle East. Turmeric is going to be best used in a rub specific to one of these varieties of cuisine, but it can also be used to simply add a pop of color.

While Cumin could have fallen into the seed category, we also had to mention its more common counterpart, ground cumin. It's one of the most versatile spices used in the kitchen and grilling, which you’ve probably used in conjunction with chili powder and as the base of taco seasoning mixes. However, cumin has a much wider flavor profile than tacos alone. It is uniquely known for being both rich and hearty, warm and earthy with an edge of citrus accentuating the sweetness of root vegetables and enhancing the flavor or meats. If you’re looking for a little extra spin on your own flavor blend, cumin is a good place to start.

Different and yet the same, garlic and onion powder are critical elements for flavoring. Next to salt, these are used to provide nuttiness, zestiness, and sweetness to any seasoning blend. From vegetables to seafood and any type of red meat or poultry, garlic and onion powder are going to provide a flavor you don’t want to skimp on. On the flip side, it’s easy to overuse them. Add enough but not too much until you reach the desired flavor.

Not all chili powders and flakes are created equal. In fact, there is an array of different varieties coming from different types of dried peppers, each bringing with it its own level of heat and flavor. From chipotle pepper to cayenne pepper, usually a little goes a long way — unless of course, it’s the mildest form most commonly known as just chili powder.

Cinnamon may not be the most common of grilling spices but its one that serves a unique purpose. Characteristically, it is woody and earthy with a warming taste, making it slightly sweet and yet pungent. While cinnamon is most often used in baking, there is a delicate balance of using cinnamon to pull out the natural sweetness of foods, even meats. In small doses, cinnamon can be a great addition to BBQ rubs, Southwestern rubs, and smokier flavor blends.

Sage, rosemary, parsley, cilantro, basil, and oregano are common herbs you’ve probably experienced. While they come in the fresh form, the dried variety allows you the space to mix them together in a rub or a blend without the fear of it going bad. But you must note that while they each hold their own flavor profile, concentrating down the flavor of the fresh into the dried, they all tend to err on the side of bitterness, so use less of it than you would fresh. Make sure your dried herbs are as fresh as possible, as they definitely lose their flavor over time. To make sure they still have flavor, smell them — the aroma tells the story.

Next, to salt, pepper is the most commonly used spice in the world. While they are two totally different components, they function much the same. Pepper adds both heat and depth of flavor to nearly any dish, accentuating the other flavors in a dish. Pepper comes in varieties from finely ground to whole peppercorns that can be crushed and even used to create a thick, crispy coating on meat. The flavor is the same, but the texture may vary. Pepper or peppercorns combine well with citrus, garlic, spices and even seeds like coriander.

Mix Up Your Own

Now it's your turn. Start mixing and matching different spices and herbs you like to uncover your own unique blend. We've given you a few examples to get yourself started, but take note: this process of making your own blend takes no more than five minutes, and it can be stored as long as you would any spice. Of course, as always, if you want all the flavor without any of the mixing, you can purchase taste-tested and approved Simply Organic Grilling Seasons. From vegetables to fish, poultry and meat, there is just enough variety to keep your taste buds entertained.

Works great with mixed veggies, on seafood or any cut of meat. It’s an all-around delicious seasoning. 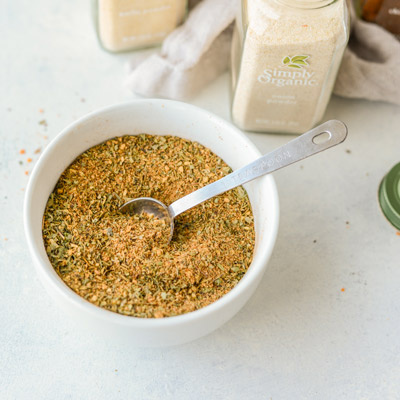 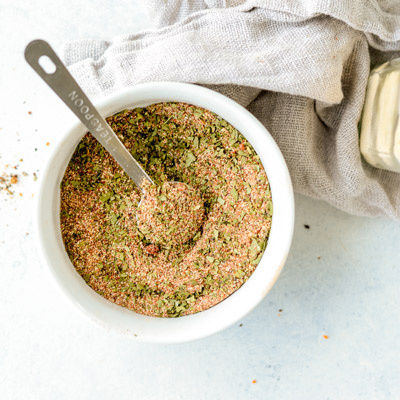